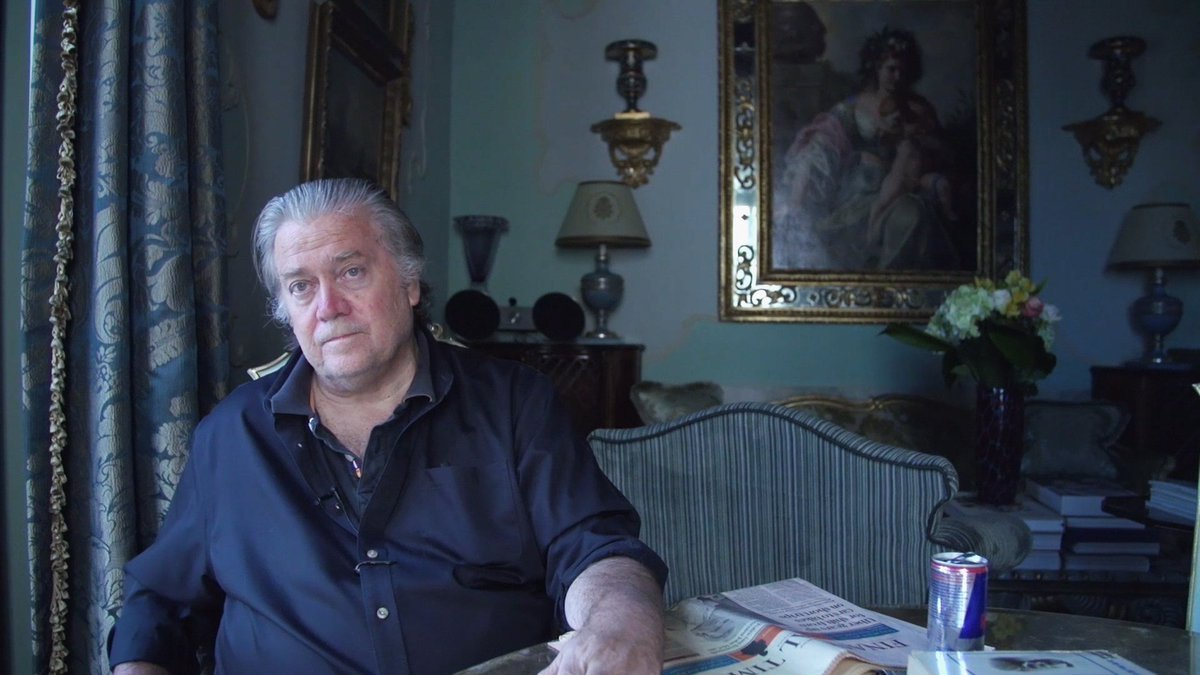 There is a moment carefully placed at the top of The Brink (2019), Alison Klayman‘s new gutsy fly-on-the-wall doc following one of the key architects of Trump’s ascent, Breitbart News, and the alt-right in the US, where former White House chief strategist Stephen K. Bannon talks of the inconceivable obscenity of Buchenwald, having visited the former Nazi concentration camp, along with visiting Auschwitz, for a film shoot. Contemplating on a nation so blinded to the monstrosity of their actions seems to sway Trump’s ex media man into a philosophical mood, obscuring any emotional reaction. There is a disturbing precision to his description, as if he were observing the human race from a position of an outsider, or perhaps, an intelligence operative. Perplexed, but detached, his mindset closer to nihilism than any sort of supremacy.

See, normal, every day, good family people are capable of doing the most evil deeds, Bannon relates. That’s how this doc really kicks off.

When Klayman and producer Marie Therese Guirgis (friends with demanding but supportive, and surprisingly artsy ex-boss Bannon up to his alt-right conversion) were asked in a Michael Isikoff interview if they believe that the man himself was a racist and an anti-Semite, or just a master manipulator – neither of them were entirely certain. Yet both maintain that what he truly believes in became irrelevant. What matters now is what he does.

Watching the doc, I wouldn’t be able to say either, but I would venture that what the footage seems to have exposed, perhaps purposefully, is that Bannon may have no belief system at all, only an evident self-serving agenda and a hidden misanthropic streak. Which he plans to further by being the smartest guy in the room. So, he chooses his rooms carefully.

Or else, his ambition has overpowered his beliefs. Bannon is pitch-perfect at examining the essence of a matter, structurally and ontologically – thus it would be unwise to assume that he does not have a well-developed worldview. He was a boy from a working-class background that went Goldman Sachs, after all. But, the big picture can easily become the little picture when there is a big ego involved. When confronted with the darkness he has helped unleash, Bannon brushes it aside, as if it was only an aberration to his ‘movement’, not the norm. Only then can you see the claws show, because the one thing we can say for sure regarding Steve Bannon is that he does not lack perception.

Not to give Bannon any credit for most likely not being himself a part of the extreme side of the ideology he is so enthusiastically selling. In a way, it’s even more damning. Once you become the job as much as Bannon allowed himself to be, you are no longer the person you have been thus far, but your own byproduct. And that’s all we get to see in this fishbowl perspective – and it’s not much, but it’s enough. Maybe it will be all we ever see. Doors that lead to other doors, that lead to other doors, while the real Steve had left the building. Some time ago.

Bannon comes across in The Brink as a charismatic, opportunistically amoral, but unfortunately pretty brainy Hollywood via Harvard player (also ex US Navy man), who spotted a niche in the political market for disenfranchised white man rage, and grabbed it, pushing through a recycled highly poisonous narrative known to be effectively infectious in times of existential uncertainty.

When you are a propagandist of the Bannon ilk (and he loves the term), you don’t have to be any sort of bigot, yourself, as long as you make other people into bigots, or augment their existing bigotry by playing into their worst impulses.

The glee he displays at beating the lefties at their own populist game, addressing widespread poverty and lack of political agency, but framed within a dog-whistle racist narrative, is what you’d expect from a maverick studio mogul in a game of upmanship with his mogul rivals, not from a puritan idealogue. He’s got that Tinseltown casual predation down to a tee. Aware the story he’s pushing plays better in certain places, and less in others, he knows his audience, but is so willing to accept crossovers.

It’s the ratings that count.

You could see why he got along well with Trump. And also, why he didn’t.

He can be charming, self-depreciating, hip even, because he is also extremely savvy, as well as a busy bee – spreading the populist word on economic nationalism, hard-line immigration policy, and general anti-globalist rhetoric far and wide, hopscotching around mid-term elections in the US, dining with Europe’s anti-immigration right-wing luminaries – along with their substantially more shady counterparts, and in none of these exchanges do you see Bannon exceptionally zealous, or blatantly xenophobic as some of the people he is mingling with. He plays the good cop to their bad cop for the cameras, but seeping through his jovial facade is the proverbial media shark – he’s in it for the long haul, and that much is clear underneath the smoke.

The person he seems to resonate with most in the long line of people he meets and greets is Erik Prince, appearing briefly, then shutting down a scene for privacy reasons. A mercenary with a certain worldview, but far from a fanatic. Amiable, even. Bannon’s greatest affection is reserved for the oddest of companions – an anti-communist Chinese businessman, Guo Wengui. And that’s where, finally, the bank rolls.

Although we find him battered and bruised at the end of The Brink, losing his laconic cool with his underlings, and miserably yet prophetically announcing the failure of the right to unite in the mid-term elections, I suspect we have not seen the last of Mr Bannon. He’ll go on advising, influencing, and above all else, sticking it to the powers that irk him.

This seems to be Bannon’s bread and butter. He’s a lethally effective provocateur, even when debunked and in a downward political spiral, and he has places to be and axes to grind.

He would need to be more careful though, if he is to step into the political arena again, front and center, as telltale signs of his essential mercurial nature can be glimpsed in the way he ever so slightly dismisses people that actually buy his narrative, and his begrudging respect for the ones that stand up to him.

Bannon knows he is the Pied Piper of Hamelin, and if you get too caught up in the tune he’s playing, I’m pretty sure he believes you deserve whatever’s coming to you. And he’ll be there, collecting.

As for all others who are in no danger of following Steve Bannon, but in substantial danger of the consequences of his game, pay attention to all that is left unsaid in this doc. It’s a good way to get to know your nemesis.