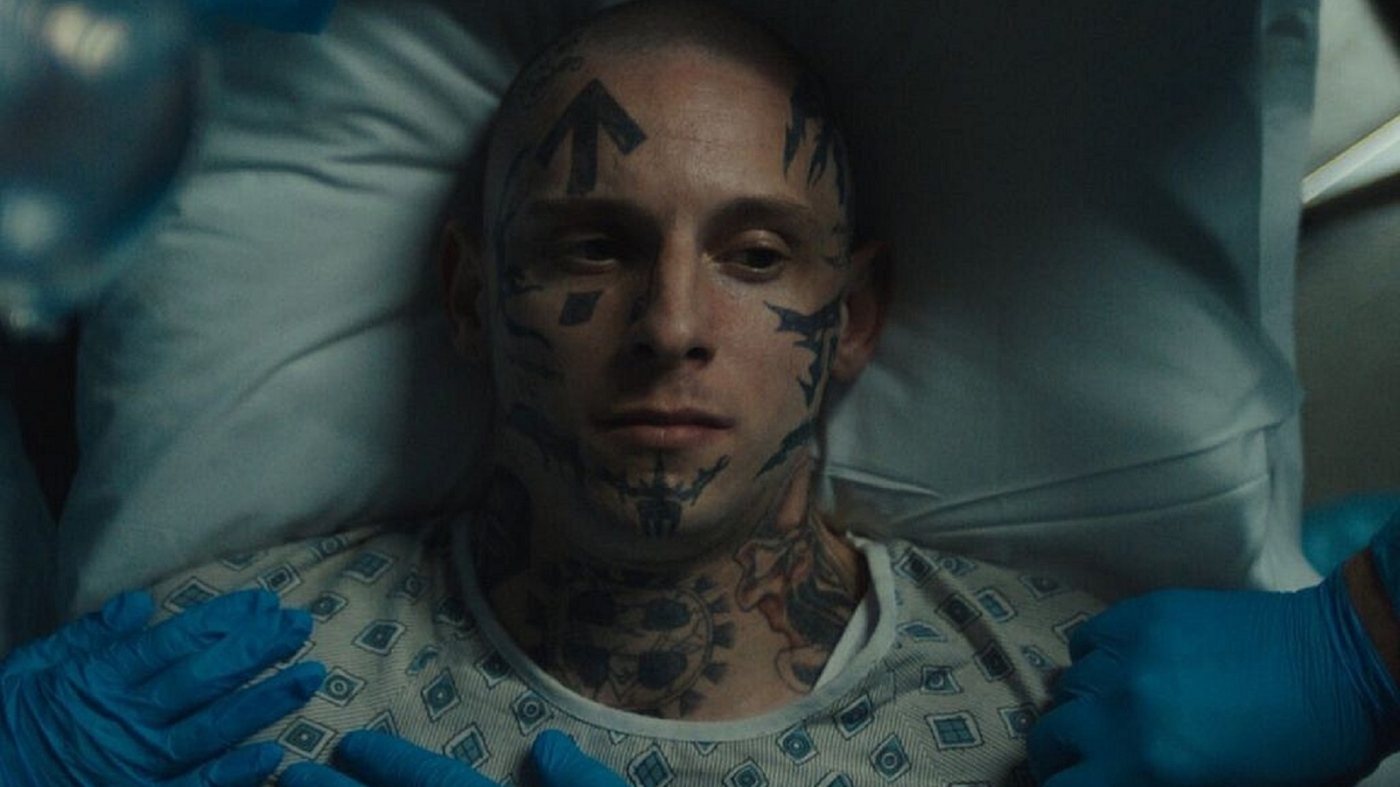 Guy Nattiv‘s raw, yet subdued take on one man’s redemptive arc is somehow more a love story than an examination of white supremacist groups in the US, and if that was where the director was heading, it’s the better for it. If, however, Skin (2018) was to be an antifa cinematic manifesto, a good deal of political dirt-digging is missing from screen. What we do get is a precise headshot of a vile but limited menace, which in itself looks like an aberration, when, in fact, we know represents a part of a much more widespread disease.

Jamie Bell plays a vulnerable, feral, real life Bryon Widner, skinhead turned FBI informant, and he does it both with a heaviness and subtlety, the history of abuse glimpsed in the manner of his reticence and sideways glances – being branded for violence a reality he is forced to encounter every time he looks up at the mirror upon a face covered in chaotic Norse and crypto-Aryan Nazi insignia.

The film opens with the scene of day one of his excruciating tattoo removal, a procedure the real Bryon went through, over the span of two years (see 2011 doc Erasing Hate), and then slips into a flashback of a rally. A rag-tag group of skinheads shouting ‘blood and soil’ at anti-racist protesters, clashing on a bridge in Columbus, Ohio, in 2005, severely beating up one young black man. The testosterone-fueled orgiastic violence continues at the compound in the woods, and the background of the cult-like Viking-obsessed white-power Vinlanders is spread like a particularly repulsive smorgasbord of beer, puke, and brief & gloomy sexual encounters, every frame steeped in human misery and pointless rage.

The Vilander couple, played with brilliance by a steely Bill Camp and darkly mysterious Vera Farmiga are in reality creepy molesters, picking up hungry, desperate stray teenagers from the streets (of which Bryon was one), recruiting them for their race army, inking their faces with brutal symbolism in order to brand them away from ‘civilian life’, permanently – thus forging an unbreakable bond to their cause. Which is, really, a hodgepodge of personal supremacist Nordic mythology mixed with Nazi sloganeering that the couple concocted themselves through marital loss, drunk driver philosophy, and home-grown deep-rooted racism. Maybe there is something here to delve deeper into when examining the way a primarily Eurocentric ideology took root in the complex social landscape of the Americas.

This extended wolf pack unit functions as a well-oiled machine with an iron-fisted leader only up to a point, as the violence inevitably escalates, becoming thoroughly murderous, when the group attacks a mosque. The pathology, however, rolls pretty predictably as in any mind-control framework, and when the Vilander golden-boy Bryon (the group’s vicious yet gifted tattoo artist) falls in love with a sweet but uncompromising mother of three Julie (a moving Danielle Macdonald), who had already distanced herself from such an environment, the scene is set for a bloody family showdown. That this sort of family also has the FBI strategically closing in on it makes doing the right thing that much more high stakes, and dangerous.

The intimate and tender relationship between Bryon and Julie, and his devotion to her three daughters, becomes a spark in the dark, and although there is nothing in Skin that gives you any real hope for a wider societal redemption, not even the slightly two-dimensional Daryle Jenkins (an excellent Mike Colter), real life political activist successfully targeting hate groups – the couple’s love at least offers an alternative outcome as possibility. And that might be just enough. For a start.