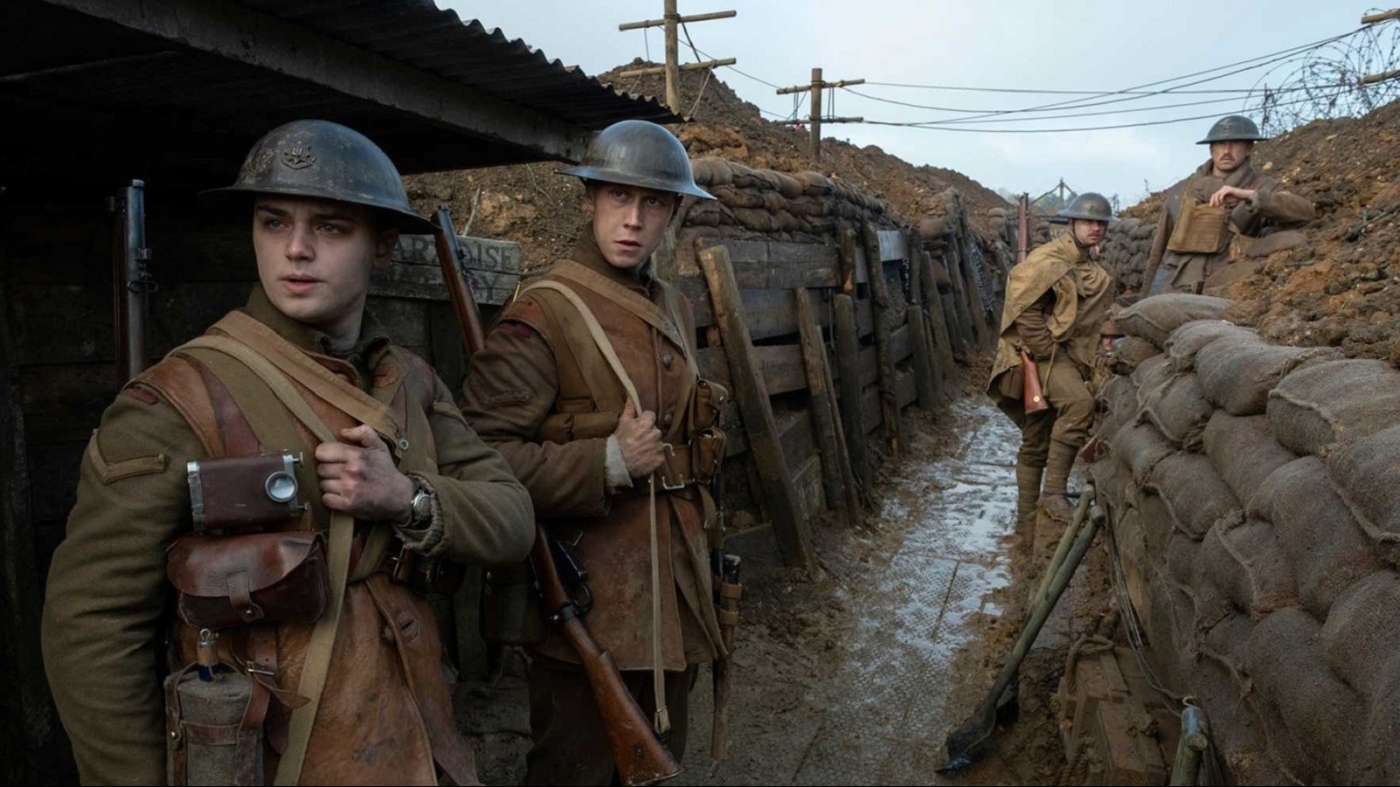 “Down to Gehenna, or up to the Throne, He travels the fastest who travels alone.”

Sam Mendes‘s thespian ‘single take’ virtuoso stunt (there is no edit on theatre stage), a high-wire homage to his WWI veteran grandfather, and based on his stories, highlights two things extremely well – film is a director’s medium, and its key ingredient is light. In a way, this is why digital signaled the slow decline of film art. Too dense and exact. A series of yes or no answers, compared to a caravan of filmstrip maybes. Only celluloid has that required esoteric quality, the materia to absorb and select. Filter reality. So, in a way, 1917 (2019) is also Roger Deakins‘s film. His Arri Alexa mimics the medium almost perfectly. Almost.

Watching it with that mindset allowed me to receive it in a more honest way, absorbing its technical bravado, and tapping into the grit and the singularity of a war situation.

And what a war that was.

The sheer mass slaughter of it, the scale of human sacrifice, the deathly onslaught of thousands upon thousands of young men, barely of age, for a strip of land belonging to someone else, the snakelike ride through the endless trenches – all of it can be grasped fully, and managed in human terms, solely through an individual perspective.

This is why the one shot (an actual seamlessly blended series of long takes) makes perfect sense – the gimmicky side of it fades juxtaposed to the perspective it offers. Two English soldiers are sent as messengers deep into enemy territory in northern France (steadily transforming to scorched no man’s land), to stop their comrades stationed in the woods, with field lines cut, walking into a bloody trap set by the Germans. The perfectly oddly paired lively Lance Corporal Blake (Dean-Charles Chapman) and stoic Lance Corporal Schofield (George MacKay) are moving through actual geographical terrain on screen. And it shows.

Emotional stakes are ramped up to the limit with Blake’s older brother being part of the doomed battalion.

Both MacKay and Chapman give it their all – their youth, fragility, subtle mutual understanding and warmth, a heroic determination, making the murder machine of WWI that more shocking, beyond comprehension. Their sole mission being not to win, but to rescue.

The wattage of the players in episode performances is staggering. As if the two messengers are encountering deities on their road through perdition. Colin Firth as General Erinmore, sending them off with a Kipling quote, Andrew Scott as Lieutenant Leslie, prepping them up dry with the darkest wit, Mark Strong as Captain Smith, intelligent, commanding, advising to deliver the letter of withdrawal to commanding officer Colonel Mackenzie in front of witnesses – as some men just want the fight. Benedict Cumberbatch as Mackenzie, ferocious and unwavering, convinced the war can only end until the last man is left standing – and finally Richard Madden as Blake’s older brother, Lieutenant Joseph Blake, eerily alike his younger sibling, but with more gravity on his face.

The entire enterprise definitely works as simulation, but it has heart, following one glorious golden thread. Fighting for the next breath.

The scene in a town under grenade fire truly made me gasp in almost religious amazement, a strange mirroring of the nativity scene, high-grade cinematic poetry – an emotional grace note of the tallest order. The kind of artistry that in lesser hands would surely go full sentimental. As revealing it might damage your experience of the intricate tapestry of 1917, I leave it to you, dear reader, to behold alone.